What to See & Do in Scania, South of Malmö

If you are planning a visit to Malmö and want to extend your holidays in the region of Scania in the south of Sweden, I can recommend these places that we visited during our month-long fly and drive holidays through Sweden.

On this route you will visit Scania’s agricultural district known as Söderslätt and the farthest point of it, Smygehuk, is only 50 km / 31 mi southeast of Malmö.

In Foteviken, 25 km / 15 mi south of Malmö, you will find the museum and Viking town of Foteviken, location of many films and tv series and a highly appreciated visit in the area.

You can reach Foteviken even by public transport. In the previous link I write about our visit to Foteviken in detail.

The Skanör – Falsterbo penisula is a beautiful area of ​​long white sand beaches – including a nudist and one for dogs – where the locals in Scania go to bathe and swim when the weather is good. Many have even their own beautiful little cabins where they can get dressed and store all things needed to enjoy the beach.

Others who come to the area will play golf at one of the two golf courses overlooking the Öresund Strait. We went to the beach of Skanör to take a walk and see the atmosphere even though on that day we didn’t bring any swimsuit.

One of the visits to the area near the beach of Skanör are the much photographed colorful cabins. To reach them you have to go to the parking Skanörs norra strands parkering and follow a path from there for about 250 meters.

Cabins by the Sea in Skanör
Photo: Israel Úbeda / sweetsweden.com

Selfie at the Beach in Skanör
Photo: Israel Úbeda / sweetsweden.com

A good place to eat is the restaurant next to Skanörs strand called Badhytten with a very maritime feeling.

If you visit the area as well as taking a bath, you can visit emblematic places in the village such as the Town Hall of Skanör (rådhus) dating from 1777 or the Skanörs Stubbamölla mill from 1700.

Falsterbo is famous for its horse festival taking place during a week in July. Also in Falsterbo is Kolabacken, an old coal lighthouse among the oldest in Scandinavia, and which since 1796 was replaced by the current Falsterbo lighthouse.

From Falsterbo you can access the following destination but only on rare occasions.

Måkläppen is Sweden’s oldest natural reserve, protected since 1902, consisting of sand deposits that constantly change due to wind and ocean currents. In Måkläppen birds and seals dehull and give birth so it can only be visited from November to January. Access is prohibited for the rest of the year.

As we visited in June we had to settle for seeing this picture from the air of Falsterbo and the Måkläppen area (up left).

From Flommens GK golf course to Måkläppen there is a one-hour long walk (many times on sand) but with the usual stops the duration of the journey might be 2 or 3 hours.

One of the most interesting things to do in the place is to spot gray seals and common Atlantic seals while they swim peacefully with their young. Also watch the migratory birds that despite having declined over the years still approach this area of ​​unusual natural beauty.

One thing I always recommend to those who travel to Sweden and are interested in the flora and fauna of a particular region or area is to visit the Naturum centers distributed throughout the country. 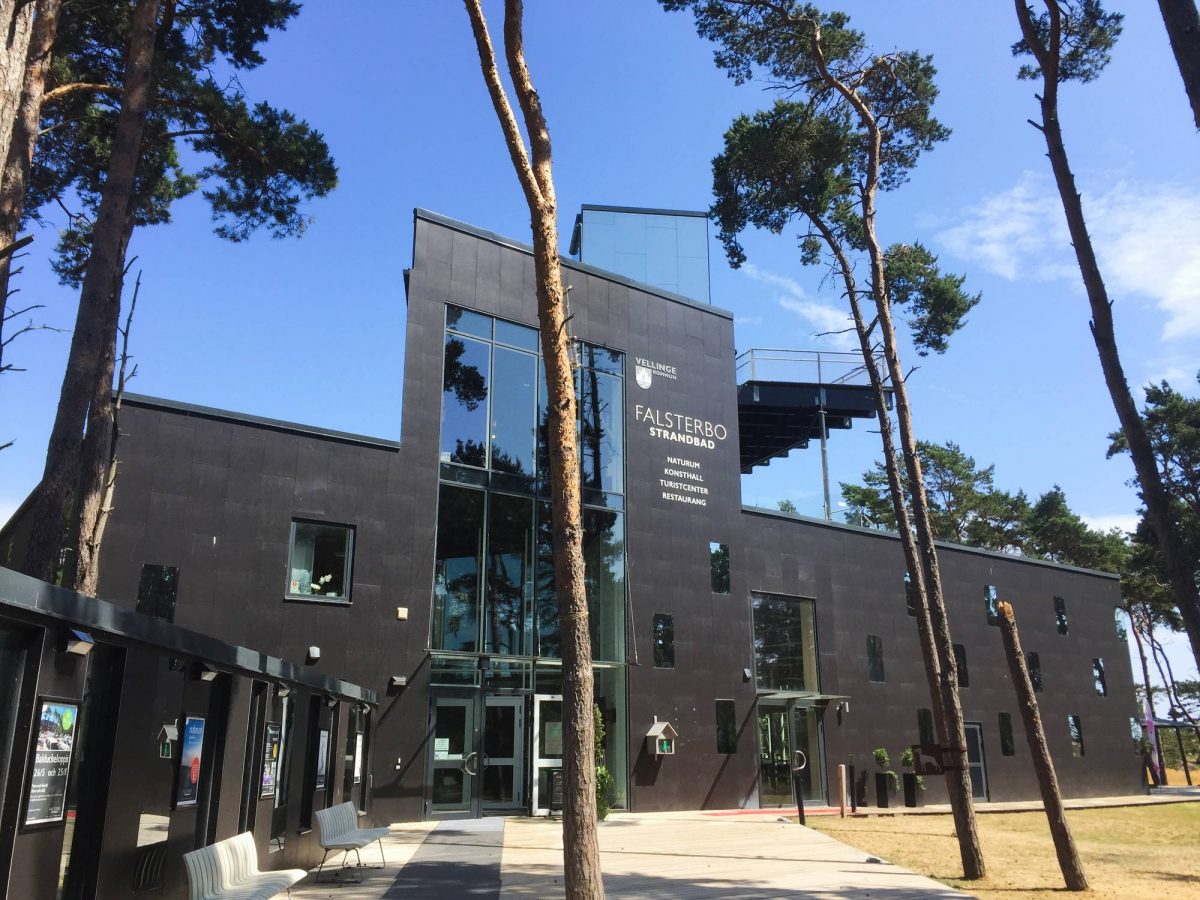 During our visit to the area we went to Naturum Falsterbo some 10 km / 6mi away from the previous destination. 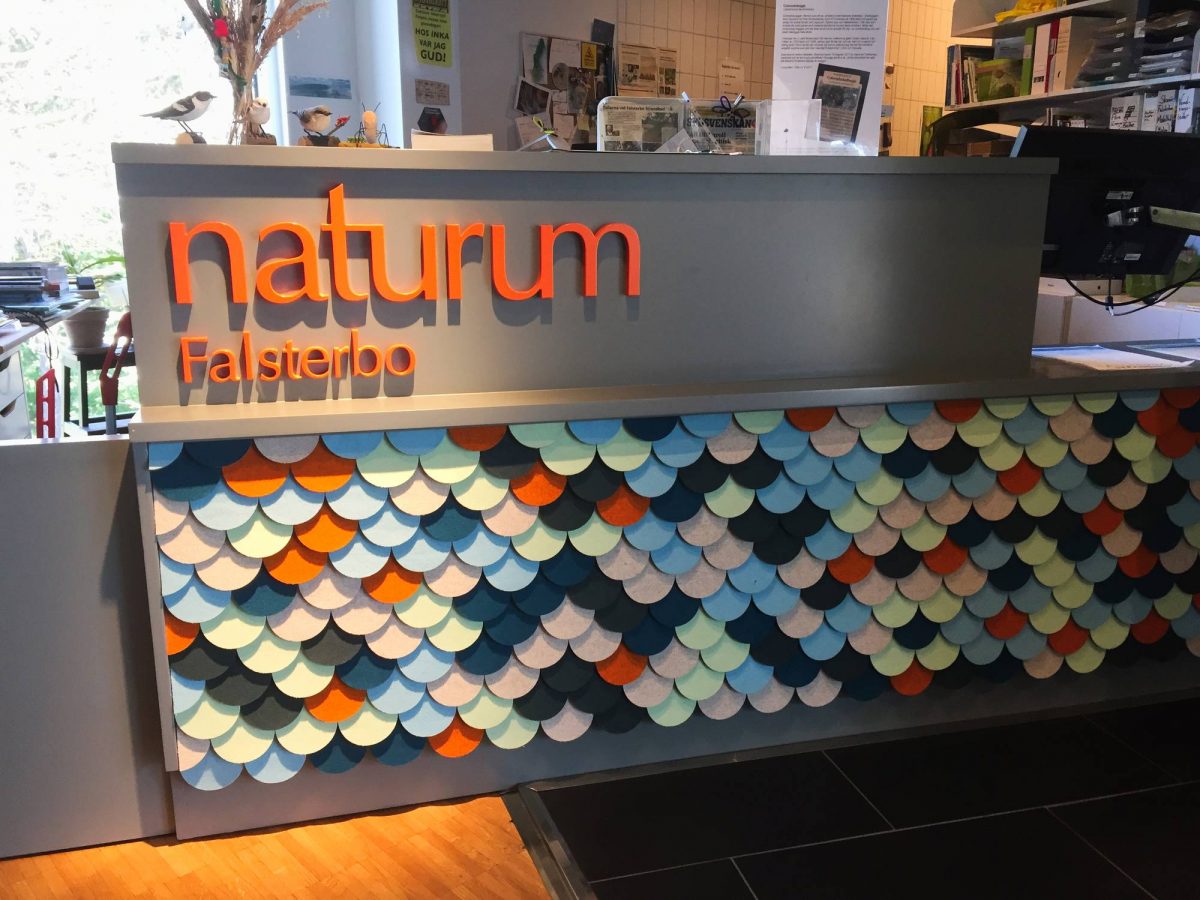 As in all these centers in Falsterbo you will find information in English about the particularities of the landscape and animal life of the destination but also experiences for the senses and for the little ones to discover the natural wonders of the place while playing.

At Naturum Falsterbo, for instance, we learnt about the local plants in the area and about the different types of birds. We could also watch them with binoculars and learn through other fun games.

Other famous natural destinations in this area of ​​Scania are the beaches of Ljunkskogen and Ljunghusen. They are located 8 km away from Naturum Falsterbo which is less than 10 minutes by car. 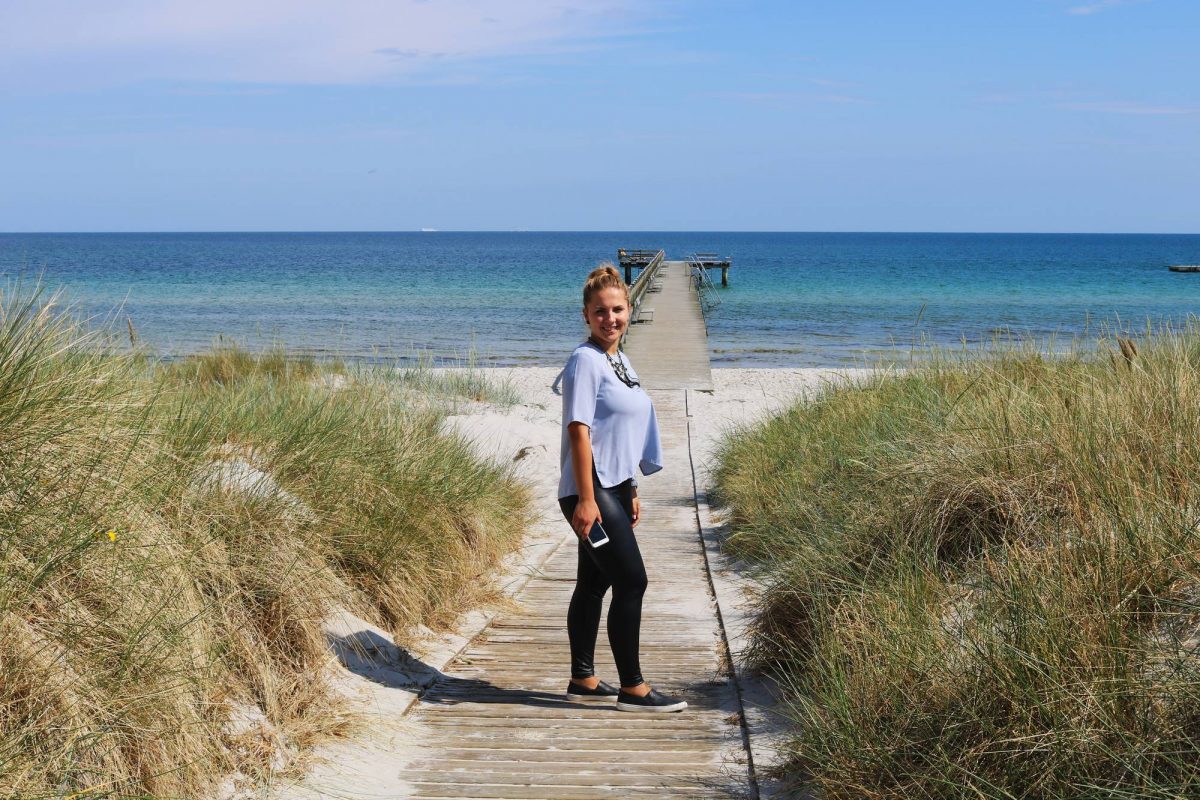 On Our Way to the Beach in Scania, Sweden
Photo: Israel Úbeda / sweetsweden.com 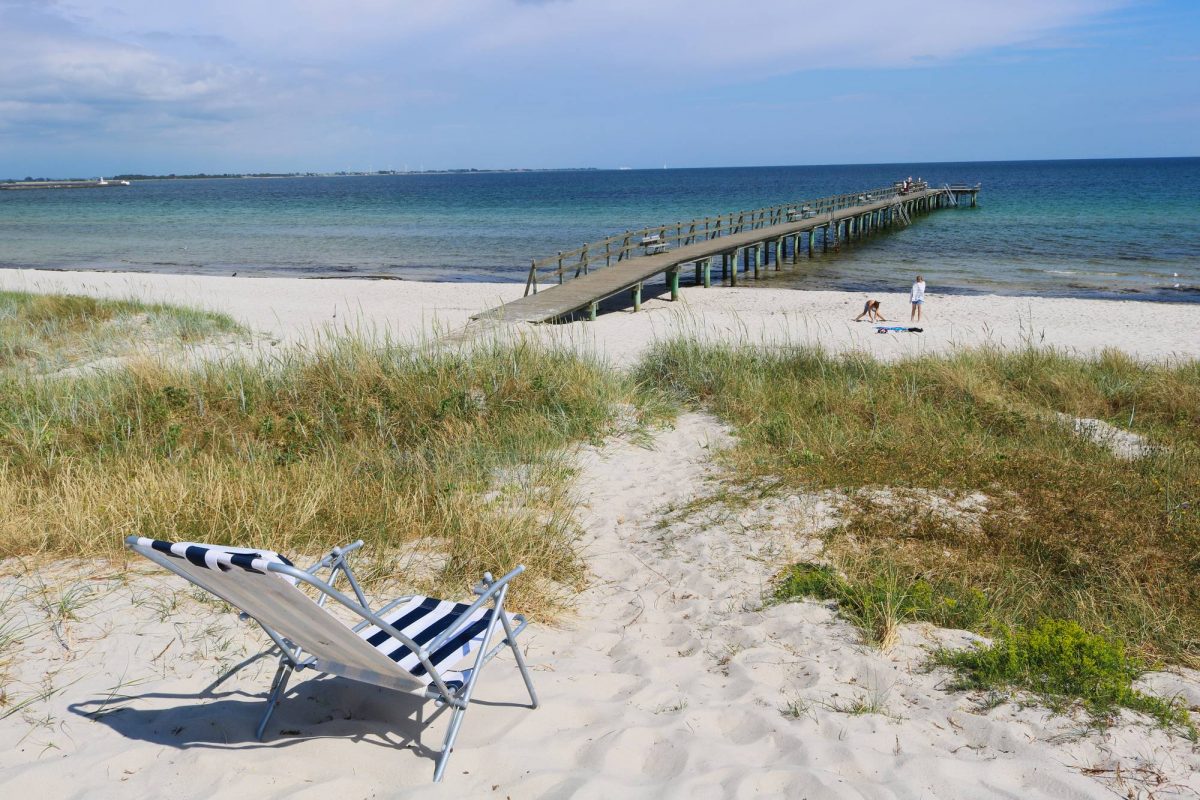 Here there is also a series of very nice, famous and photographed private cabins. 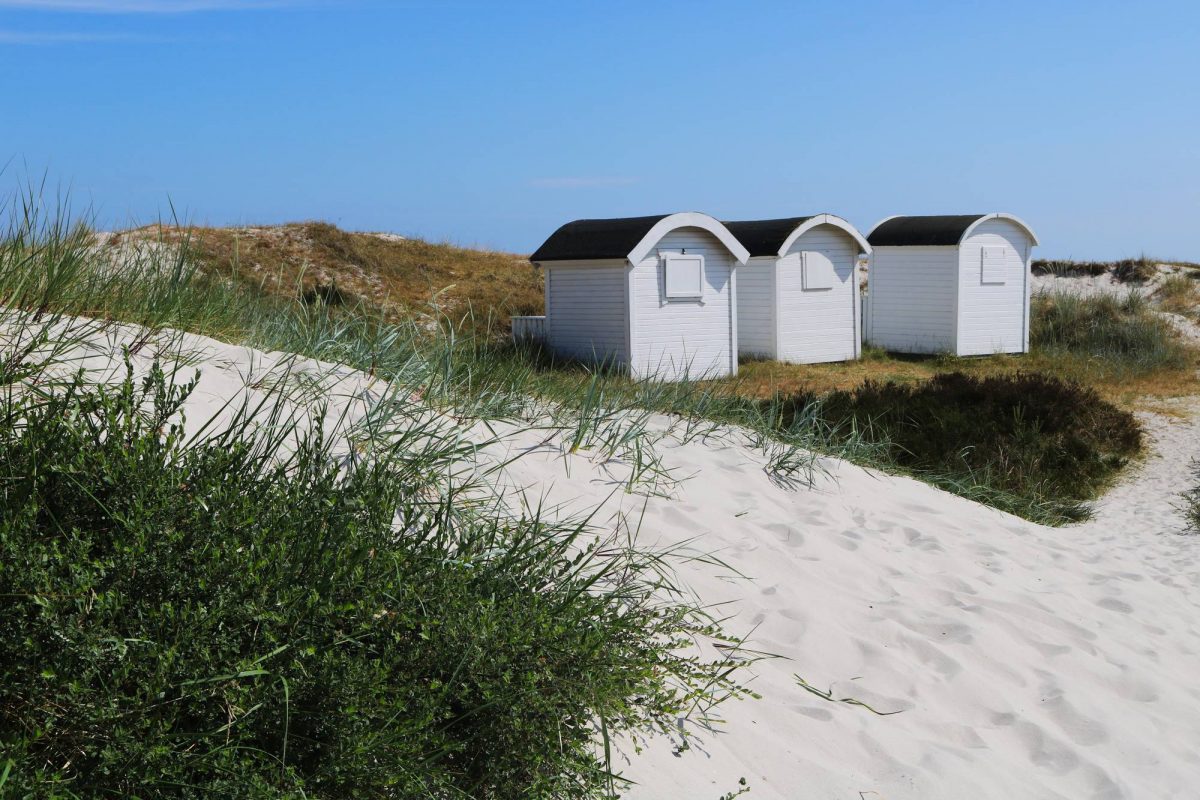 We enjoyed the good weather and had a swim here. 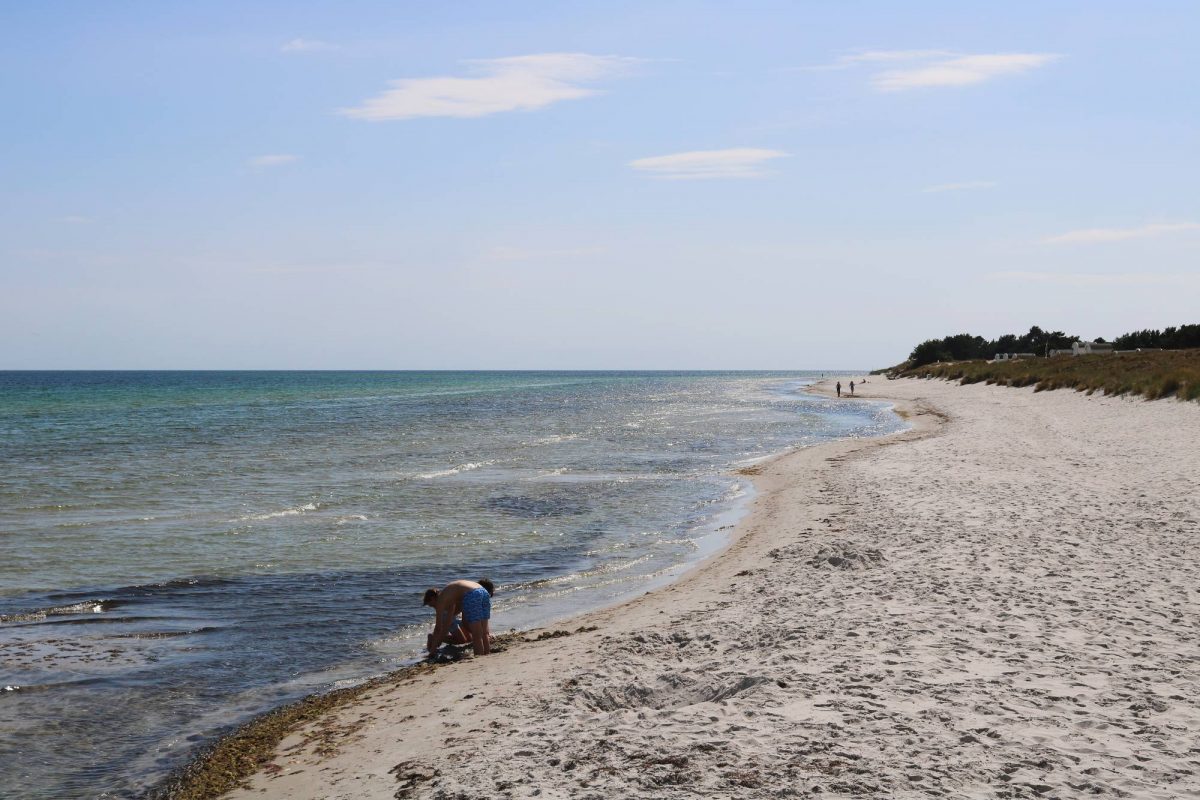 Trelleborg is the southernmost city in Sweden and one of the access point to the country by boat with one of the ferries from Germany namely the Travemünde – Trelleborg. It is a somewhat different city. Since 1984, more than 100 palm trees have been brought from Alicante, Spain and have adapted perfectly to the climate of southern Scania in summer. This is totally unusual in Sweden. Of course, in winter they have to place them inside greenhouses.

One of the visits to Trelleborg is Trelleborgen, a circular Viking stronghold dating from the year 900 a time when Scania was under the control of Denmark. Trelleborg was the starting point of King Harald Blåtand’s (Bluetooth!) campaign to christianize the region. 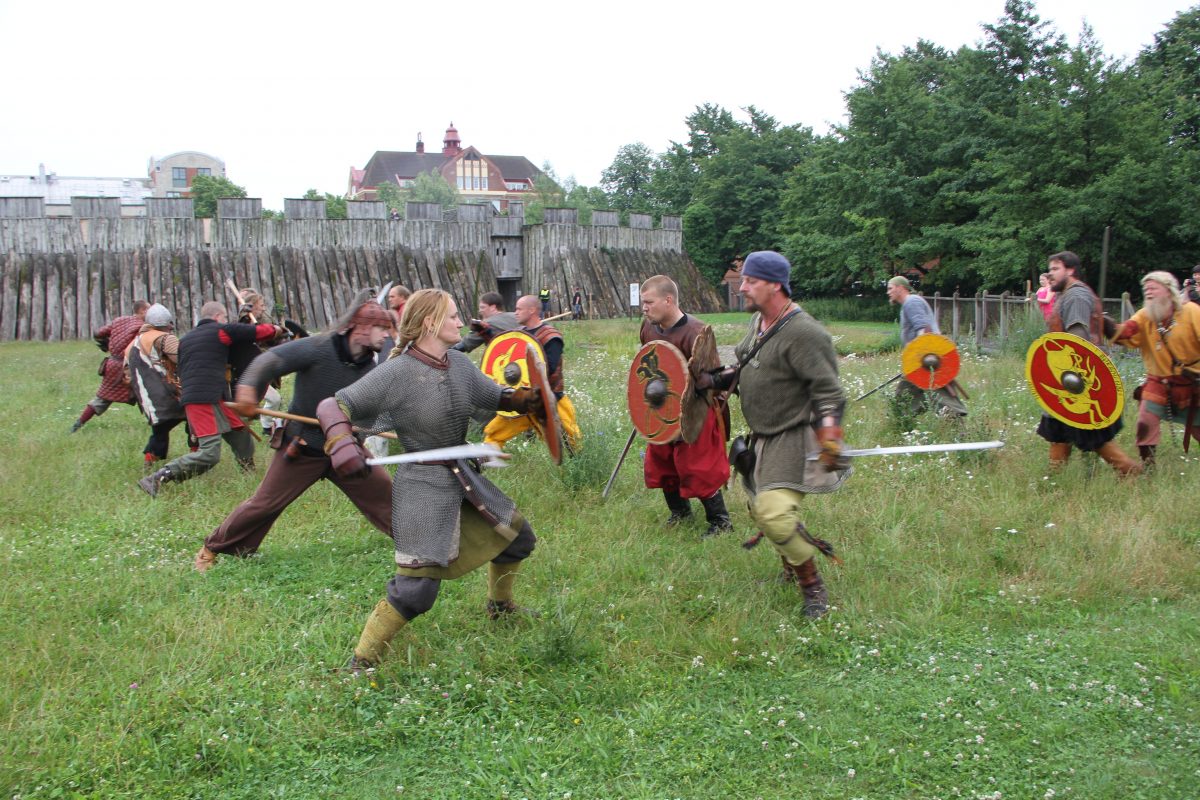 Viking Battle in Trelleborg by the Stronghold
Photo: Ingrid Wall

In summer the visit to Trelleborgen also offers activities such as runic writing, Viking games, crafts, etc. The ticket is worth only 40 SEK (4€ / $4.5). The best time to visit Trelleborgen is the second weekend of July when Vikings from all over the world engage in recreating the Battle of Trelleborgen. In 2019 the slaget om Trelleborgen is celebrated from July 5 to 7.

If you are interested in the subject here, I wrote about more Viking things to do in southern Sweden*.

If you like geographically unique places Smygehuk is one of them because it is the southernmost point of Sweden. And in the cape itself there is a sign that says so. Smygehuk is about 50 km south of Malmö. 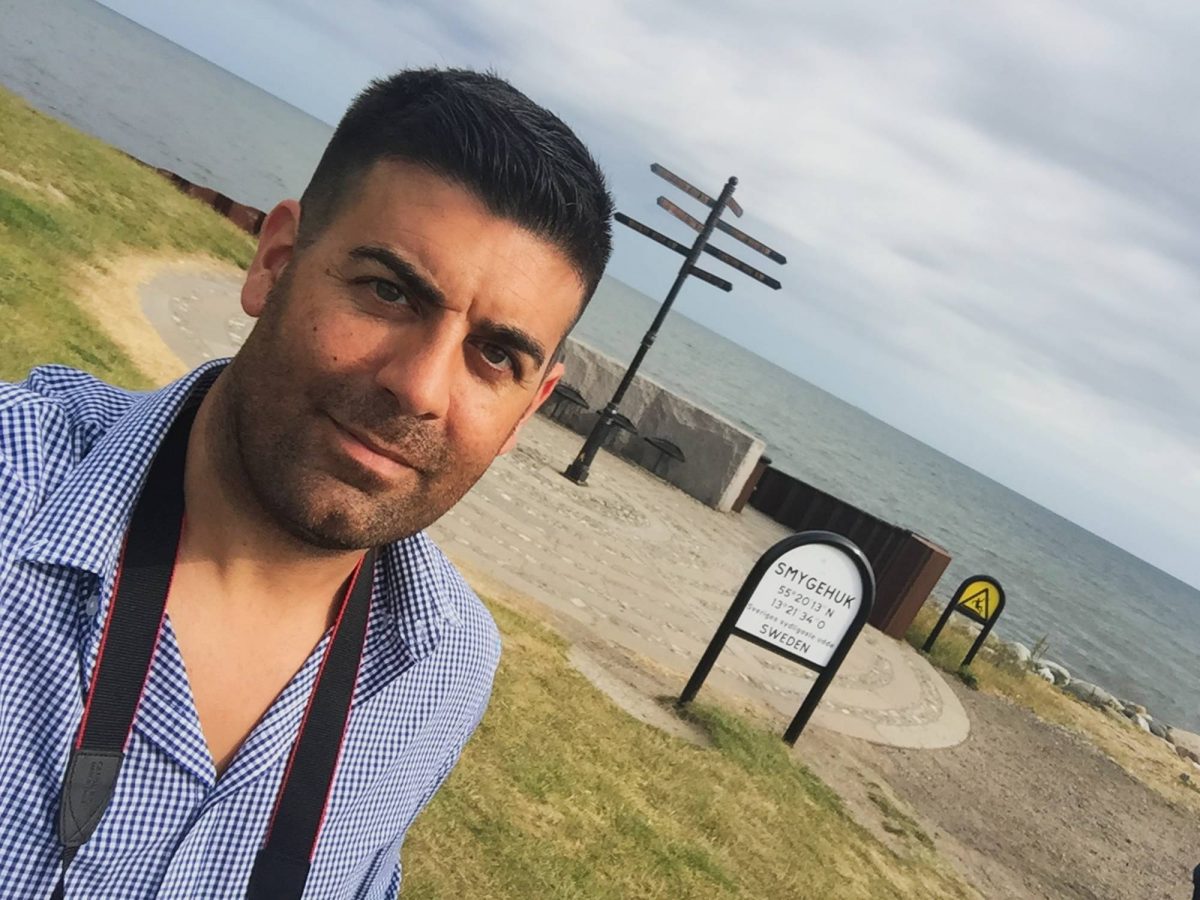 In addition there is a lookout called Utkiken. 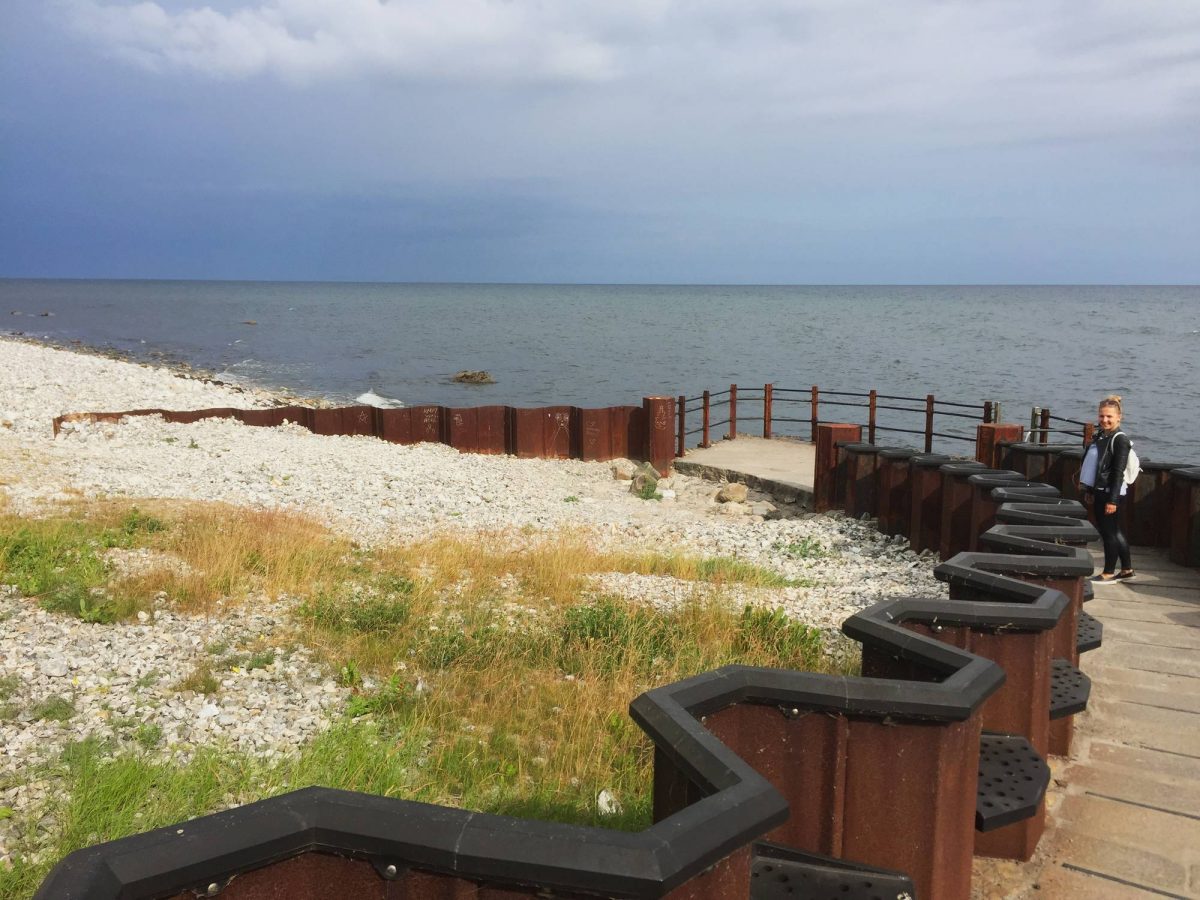 In Smygehuk you will find a unique statue called «Famntaget». This statue has become famous because they say that the person who appears in it is the grandmother of the actress Uma Thurman who in her day was the model of the sculptor Axel Ebbe. The statue represents a female hugging the sea with her hair in the wind and letting herself embrace by the ocean while enjoying the sun and filling her lungs with the fresh air of the area. 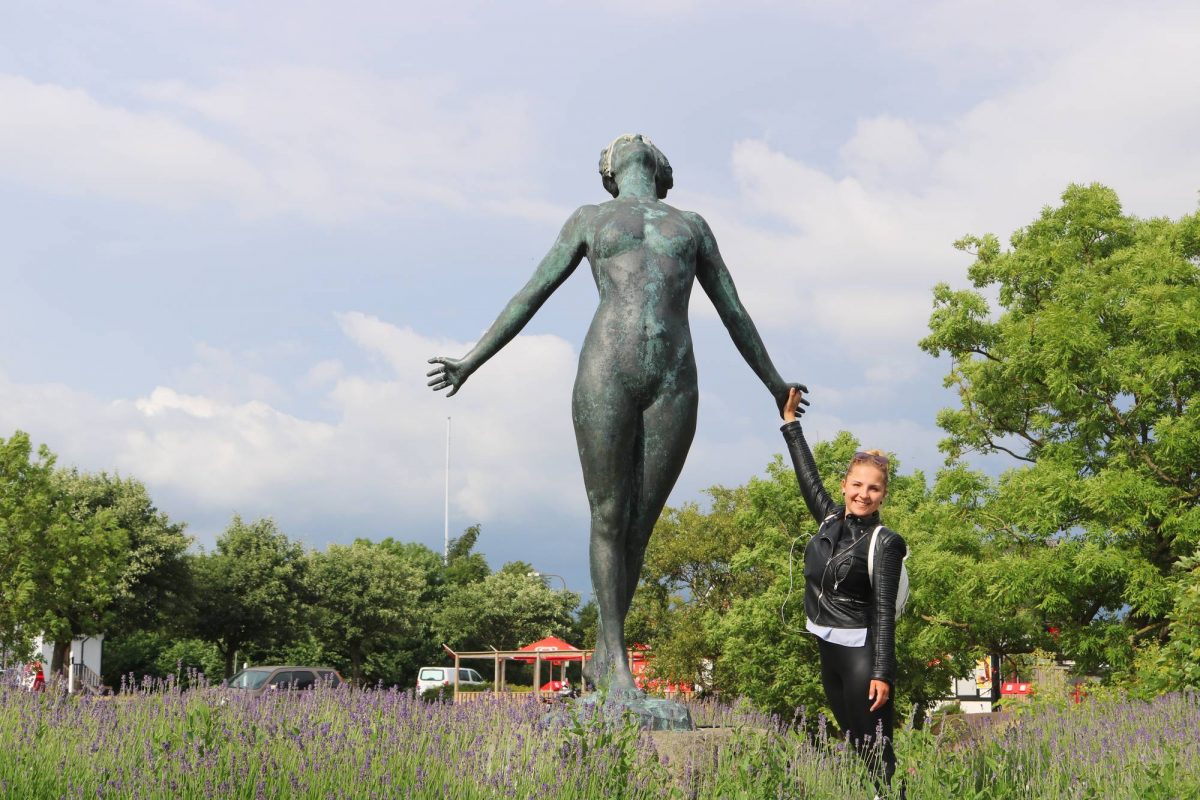 You will also find in Smygehuk several places dedicated to selling local crafts where you can buy souvenirs as interesting as this dish by Nils Holgersson.

According to the story of Selma Lägerlof, it is here in Smygehuk that Nils says goodbye to the wild goose Akka after completing his trip to Sweden. There is no better memory than this for the fans of this very Swedish story! 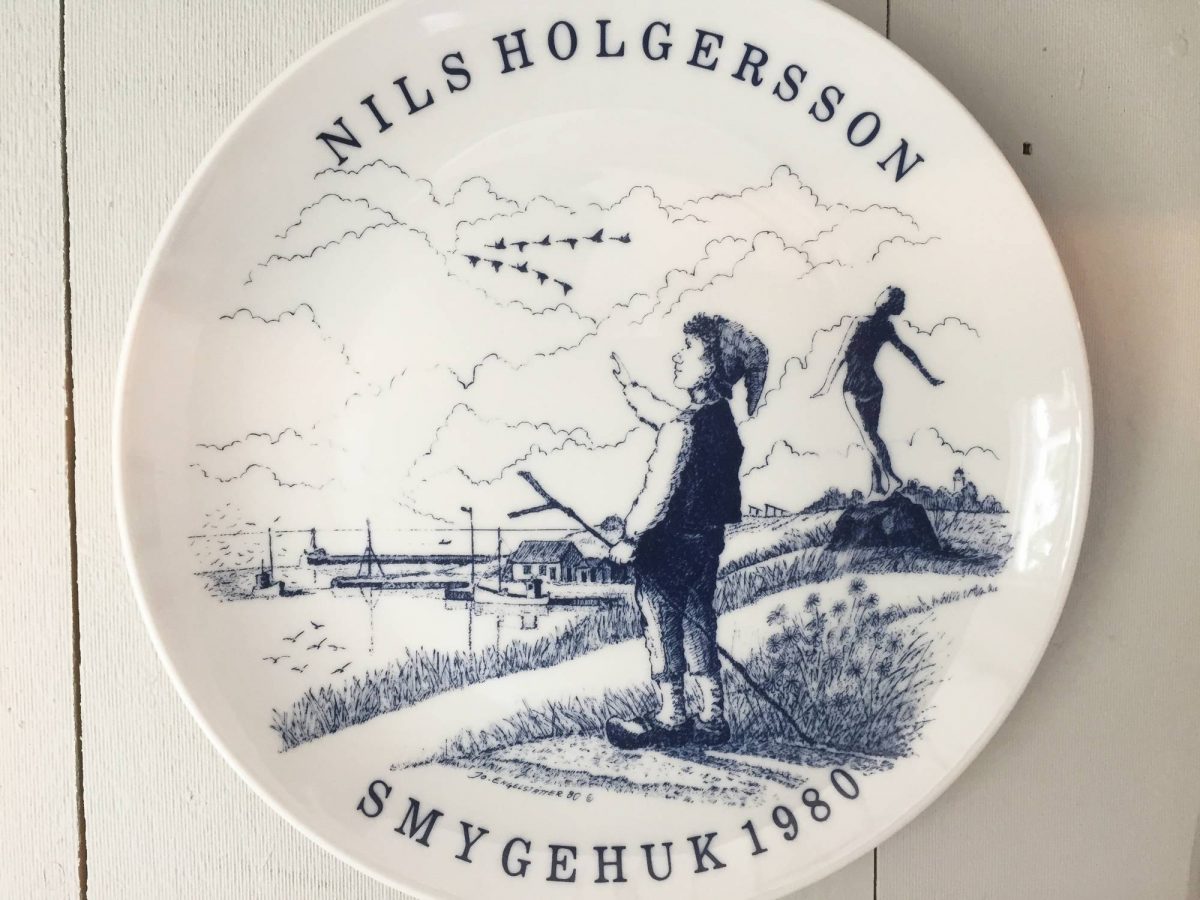 If you like visiting iconic spots at Smygehuk’s tourist office you can buy a certificate of having been in the southernmost point of the country as well as get information about other things that you can see in the area such as: Köpmansmagasinet, the house of merchants, where people traded at the beginning of the 18th century and which now functions as a place for events, exhibitions and sale of craft materials. You can also visit the old fishing port. 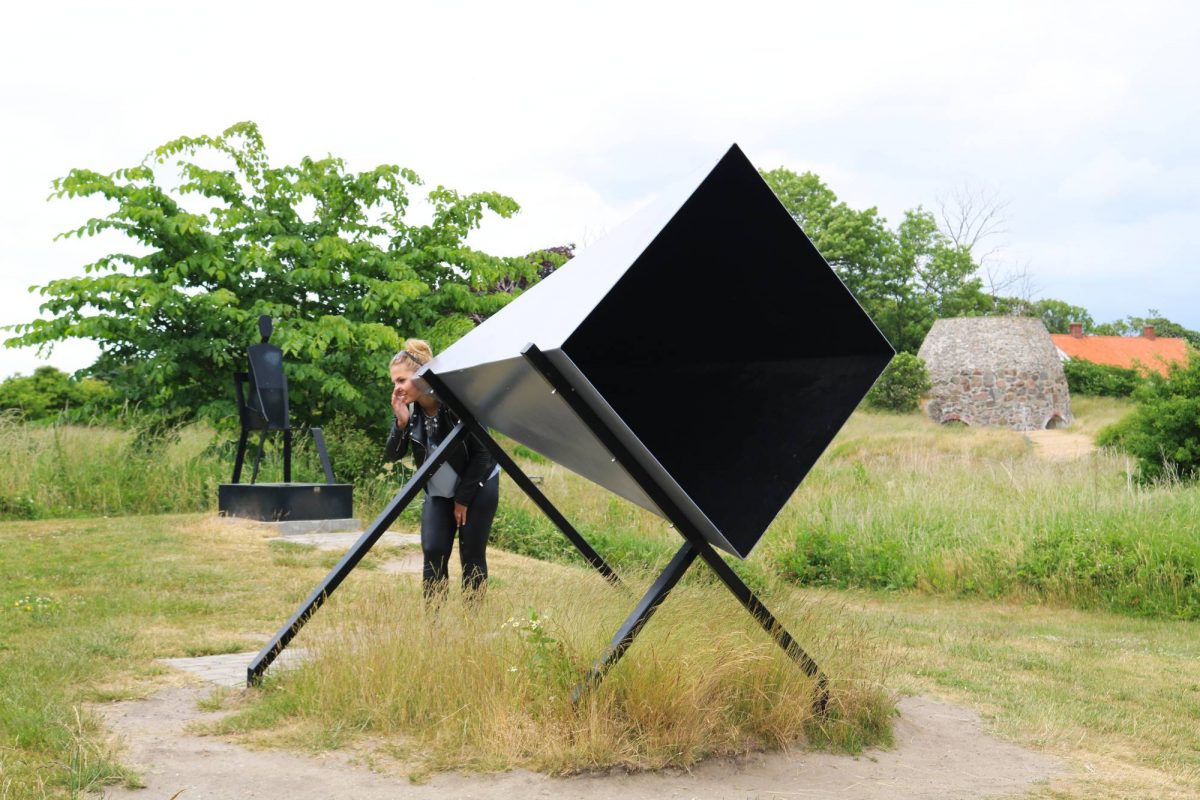 Listening to the sound of the sea in Smygehuk
Photo: Israel Úbeda / sweetsweden.com 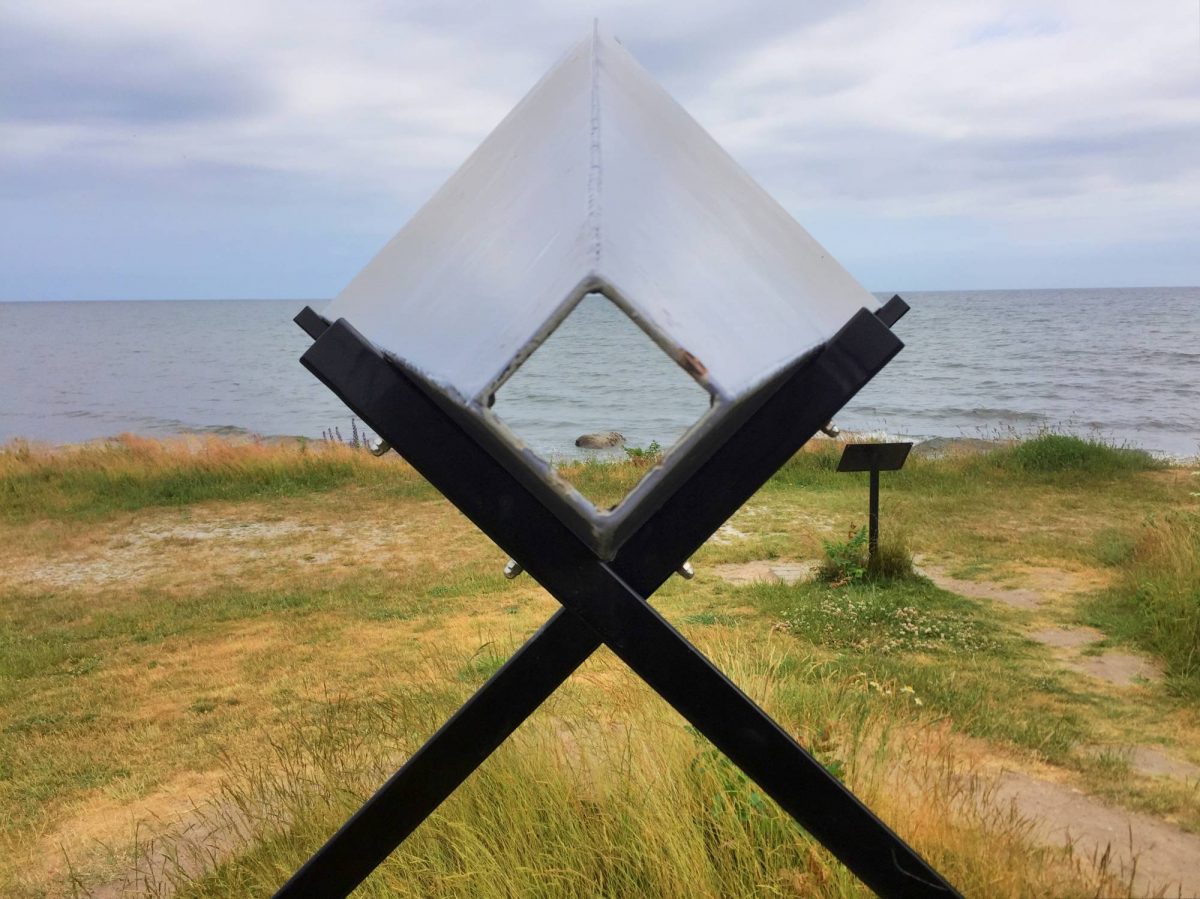 The sound of the sea in Smygehuk
Photo: Israel Úbeda / sweetsweden.com

And if you want to drink something the area also has the Smyge coffee shop, the southernmost of the country, which has a terrace with views.

Map of the Route in Scania, South of Malmö

This is the map of the route in Scania, south of Malmö in the Söderslätt region.

Map of the Route through Scania in the ​​Söderslätt Area
sweetsweden.com

These visits can be easily done in a couple of days going back and forth to Malmö every day. If you want to do other visits the next area to discover would be the region known as Österlen with cities such as Ystad, Kivik or Åhus of which I will write soon. If you are interested in other things to do in Scania check this article 12 places to visit in Scania.*