As you probably already know June is for me one of the best seasons to visit Stockholm and Sweden in general. The days are longer, the temperature is usually pleasant although it might rain and lovers of traditions and festivals can enjoy Midsommar, the Swedish celebration of the summer solstice.

Regarding the date for Midsommar, it always falls on the Saturday between June 20 and 25. What the Swedes celebrate is called midsommarafton – midsummer eve on Friday night – since the midsommar day is to rest the hangover and regain strength.

If you are planning a trip to Stockholm, Gothenburg and the West Coast of Sweden, Lapland or Dalarna and you can choose the dates for your holidays these should include the days around midsommar. 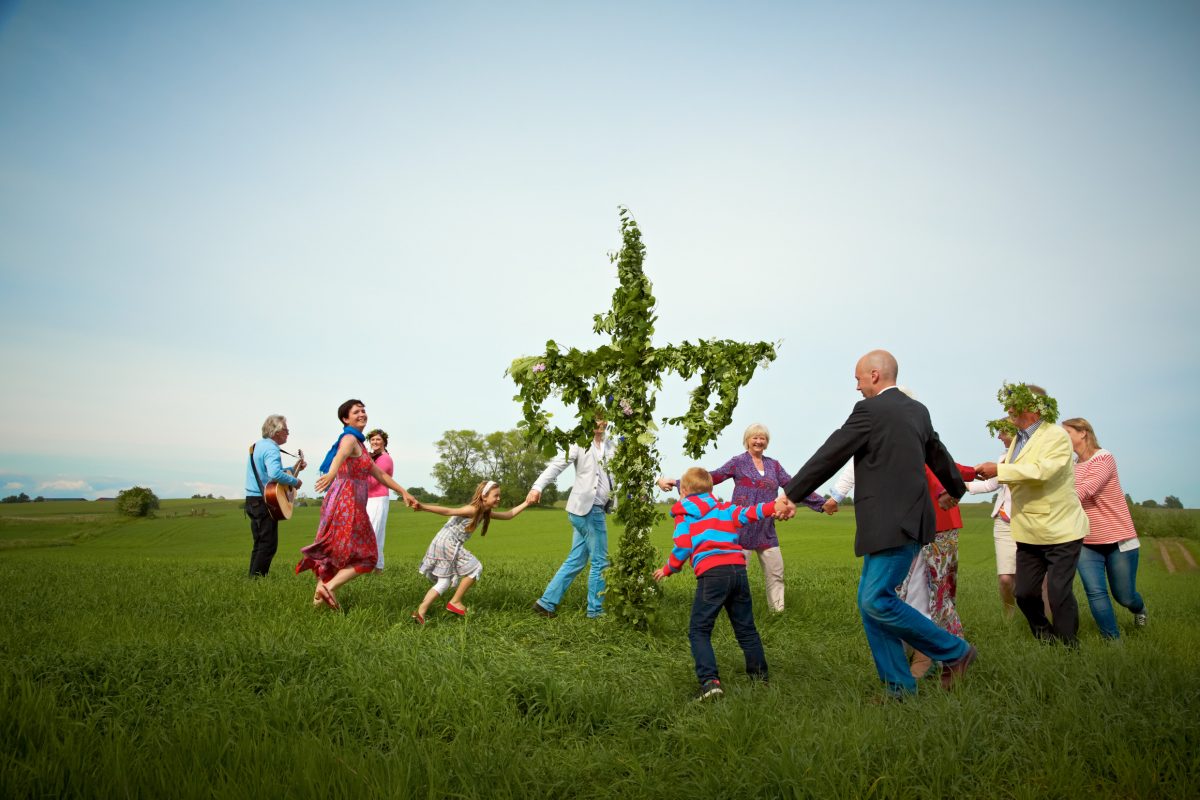 How Midsommar is Celebrated in Sweden

Midsommar is a celebration for family and friends. People usually gather in the countryside, in parks and other green areas. In fact, the arrival of summer and the sun at the top of the sky are best enjoyed outside.

Friday begins with a flower harvest to make the famous wreaths, called midsommarkransar (which is also a name of a subway stop and southern district of Stockholm) – after which family and friends gather to eat.

Food for the occasion is the the typical julbord – Christmas buffet – but adapted with summer dishes. The traditional thing to eat is herring in brine, stuffed eggs, boiled new potatoes, other kinds of meat and fish depending on whether we are in a coastal site or in an inland area. Each region has its owns variations. Snaps, a spiced liquor made differently depending on the region like Akvavit in Scania, is served between dishes and much, much beer. As the Swedes love singing, they take advantage of any opportunity to do so and before each shot of spirit they sing snapsvisor, a kind of drinking song, sung as an introduction. Hence the hangover and the headache the following day. For dessert you should not miss the strawberry cake or Swedish strawberries with cream. 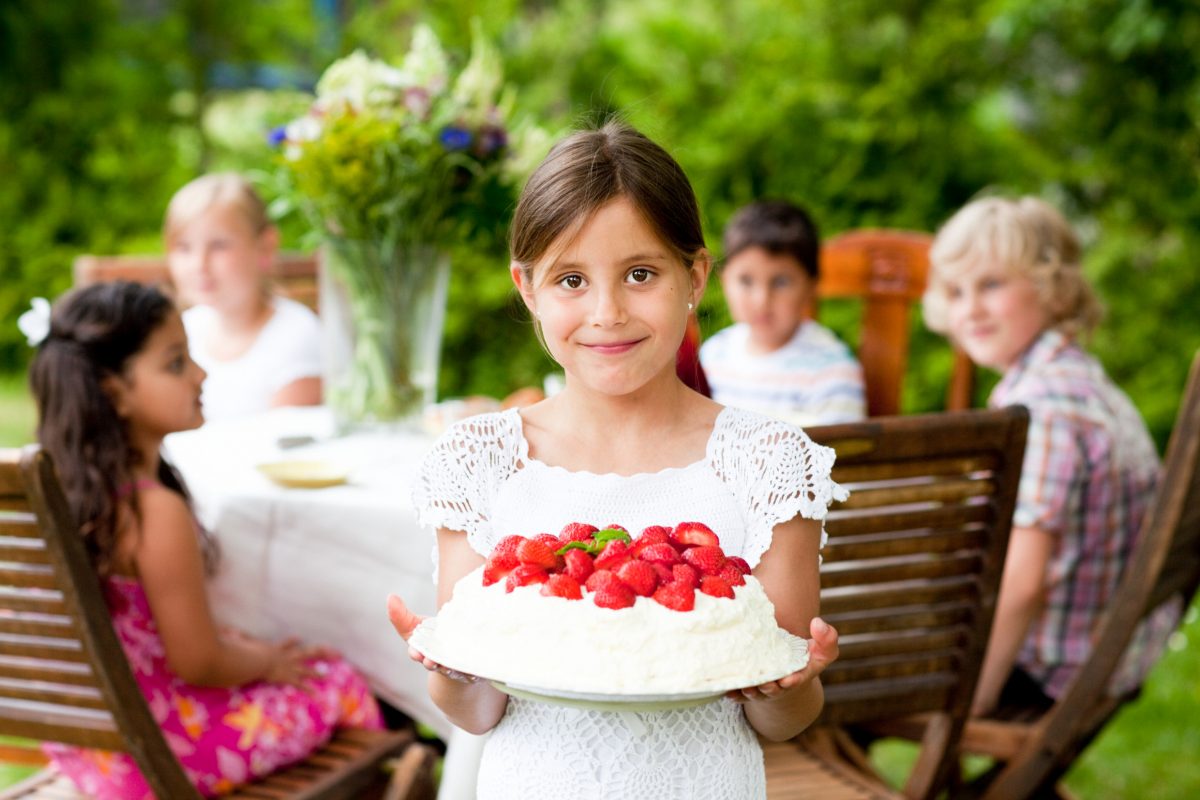 After lunch the midsommarstång or majstång is risen – the mast or pole of May – which previously has been decorated with leaves and flowers among those gathered in the morning. Around the pole there will be dances and typical joyful and meaningless songs will be sung. The goal is to bring adults and kids together to sing and move along and have a good time. Games like bag races also take place for fun.

Two curiosities: the tradition says that you have to take seven types of flowers and place them under the pillow during midsommarafton and you will dream about the person you will marry. Does it work? I do not know but it is true that 9 months after Midsommar week in Sweden baby births spike … Is it a byproduct of midsommar’s magic or too much snaps and beer? I place my bet on the second option …

If you travel to Sweden in June and want to be a participant in these celebrations, take a look at what to do in the following destinations.

If you plan a trip to Stockholm you can go to midsommar celebrations in Skansen where you can participate in creating your own flower crown, help rise the pole of May and there are music and concerts and many other activities for the whole family.

Those interested in tasting the midsommarbord can do it in Verandan restaurant at Grand Hôtel which has a tasting menu based on seafood and fish. Also in Fåfängan on the island of Södermalm – with stunning views of Stockholm – they serve a buffet for around 50€ / $55 / £45 per person or at the T / Bar restaurant at the Hotel Diplomat in Strandvägen. 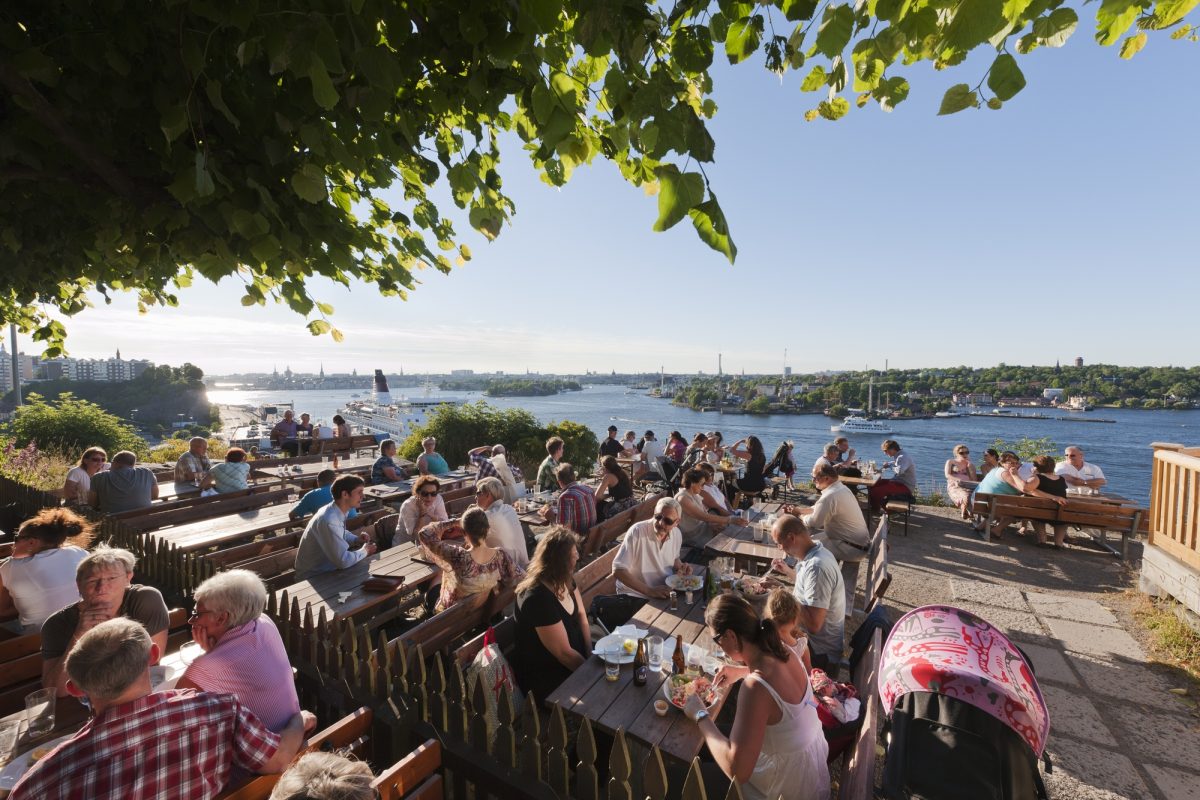 You can also enjoy gastronomic cruises in Stockholm during midsommar. There is a dinner cruise to the archipelago towards the island of Vaxholm where you can enjoy Swedish classic cuisine with a twist on board the Art-Deco style S/S Stockholm ship. Price from 195 SEK (18 € / $21 / £16). Schedule and booking here.

With the Stockholm Pass, the tourist card of Stockholm, there are boat trips available to islands in the archipelago; nearby such as Fjäderholmarna Islands or further away such as Värmdö, Grinda, Vaxholm, Utö, etc. On those islands you will also find several restaurants serving the typical midsommar buffet.

If you are visiting Gothenburg during midsommar, don’t miss the Liseberg amusement park and other selected places in the city that are also filled with activities for the whole family. Many locals prefer to celebrate this day on an island in the archipelago such as Vrångö or Styrsö accessible in less than 45 minutes from the center by tram and ferry. It could be a magical celebration for you too. 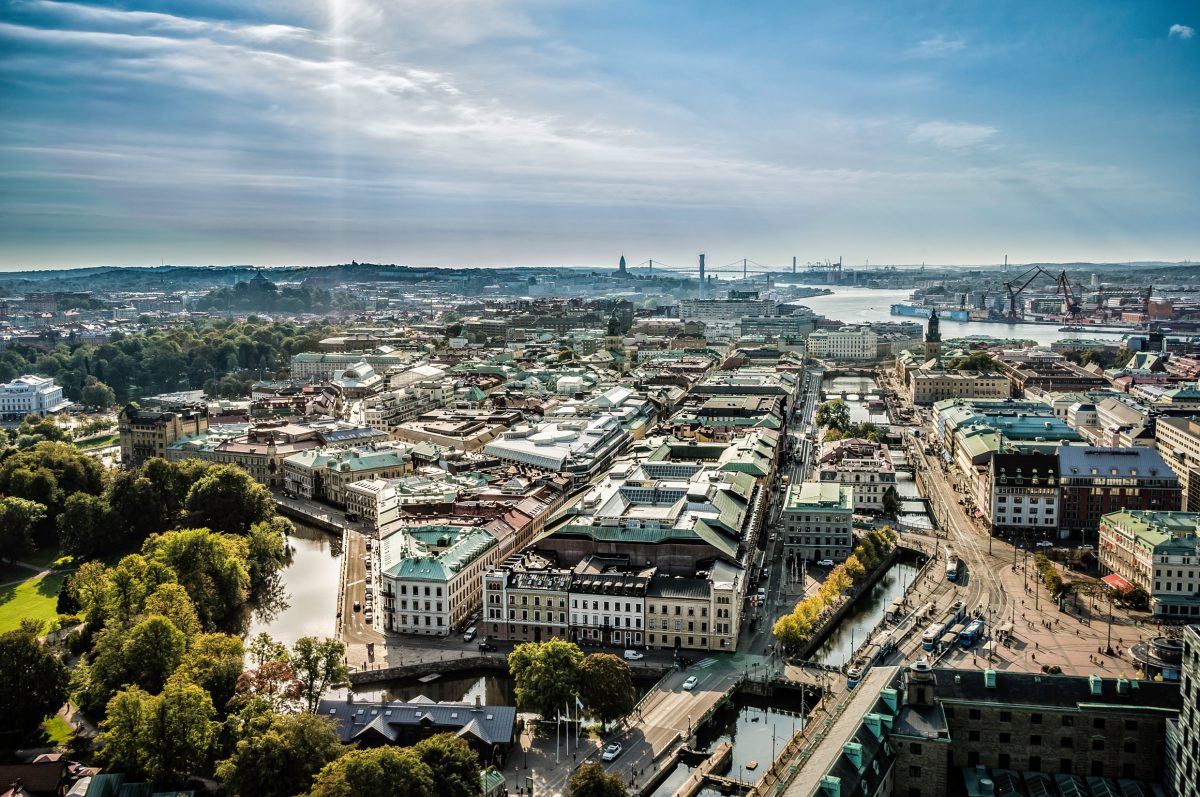 Restaurants like Heaven 23, West Coast, Bellora, View Skybar o Skärgårdens café – on the island of Vrångö – among others are open during the midsommar weekend

The epicenter of midsommar celebrations takes place in the most Swedish of the regions, Dalarna, in the vicinity of Lake Siljan and in the villages of Rättvik and Mora. You arrive in Dalarna by car or train from Stockholm in about 3.5 hours. 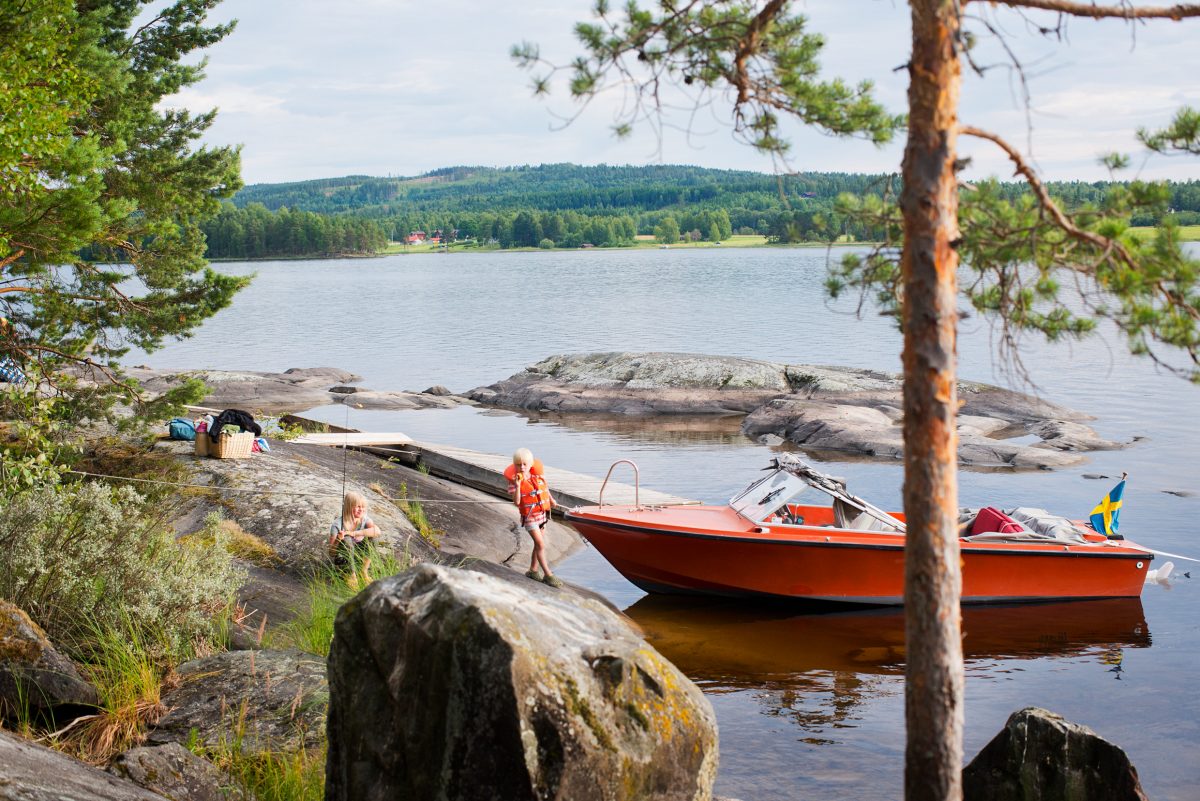 Dalarna, the Most Swedish Region of Them All
Photo: Johan Willner / imagebank.sweden.se

On Visit Dalarna’s website you will find the program for the midsummer activities in the towns of the region that might make you want to try and visit the cradle of Sweden.

In the Abisko National Park and in the existing lodge STF Abisko Station they celebrate the midsommar in style. Here the sun does not set so it can be celebrated all day long. Some of the activities include flower collection and decorating the pole of May, cable car rides, fika with strawberry cake, songs and dancing, walks and hikes through the mountains and the national park and dinners under the midnight sun at the Aurora Sky Station. 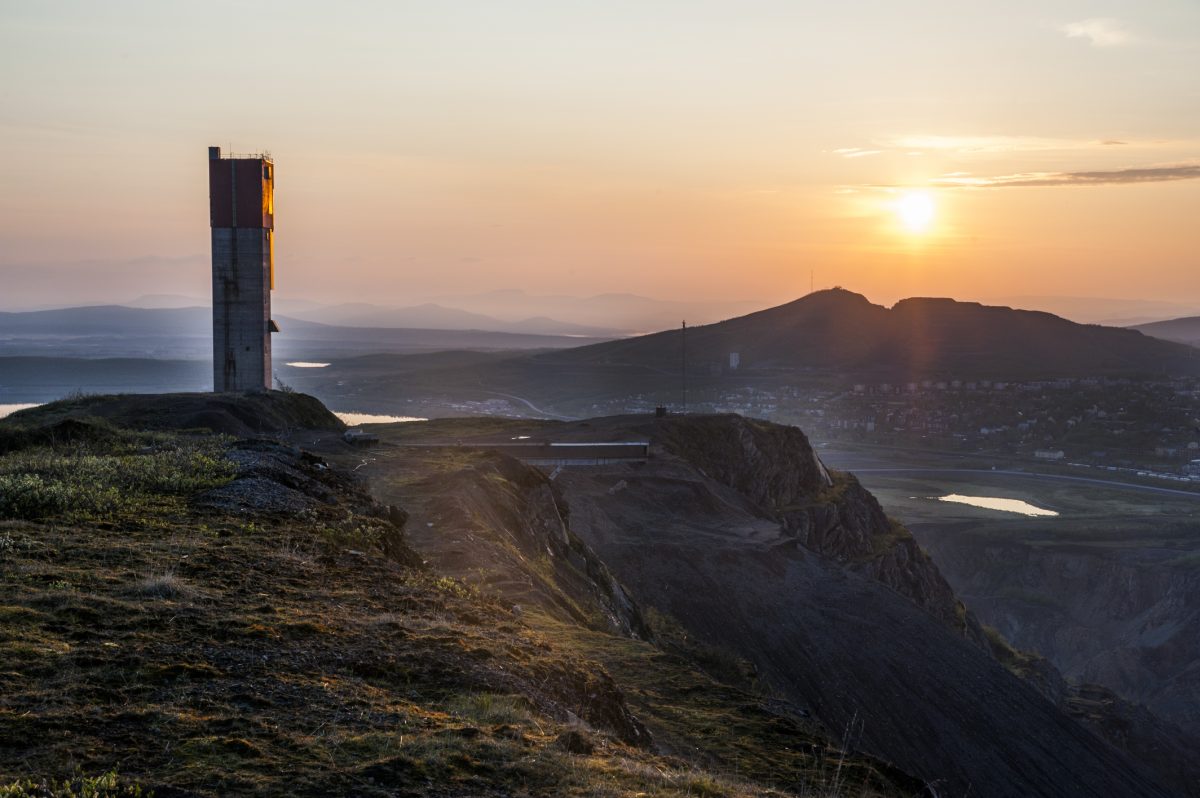 Another place to celebrate midsommar in Swedish Lapland is the ICEHOTEL in Jukkasjärvi.

The day starts with a midsommar buffet between 11:00 AM and 2:30 PM with traditional dishes. Typical celebrations at the old Jukkasjärvi farm start at 1:00 PM and after that you can enjoy summer activities on your own or with a guide, for example, rafting down the Torne river from 4:30 PM to 10:30 PM.

There are also guided tours of the Icehotel at 10:00 AM, 12:00 AM, 2:00 PM and 4:00 PM. The two-night accommodation package for midsommar includes one night in an icy artistic suite, another in a normal room, breakfast, three-course dinner in the Icehotel restaurant, transfers to Kiruna and guided tour at a very competitive price.

These are some of the places where you can celebrate midsommar in Sweden. Obviously, since it is a holiday throughout the country everywhere you will find parties which you can join and enjoy.