9 Newest Hotels to Book in Sweden

The Swedish hotel industry continues to grow both in the number of hotels in the country and in overnight stays without taking into account the obvious decline due to the pandemic. New and better hotel projects continue to be implemented and allow tourists to book all kinds of rooms and stays in modern and cozy hotels in different categories.

These are some of the recently opened hotels in Stockholm and other places in Sweden.

The Swedish capital is the tourist destination par excellence in the country and the place that hosts the most new and established hotels. I have already spoken on occasion of my recommended hotels in Stockholm.

The recent opened hotels in Stockholm are:

Hotel Ruth which occupies the premises of a 19th century building and is the first boutique hotel in the Vasastan neighborhood. The Hotel Ruth in Stockholm has 62 unique rooms decorated like classic Stockholm apartments. 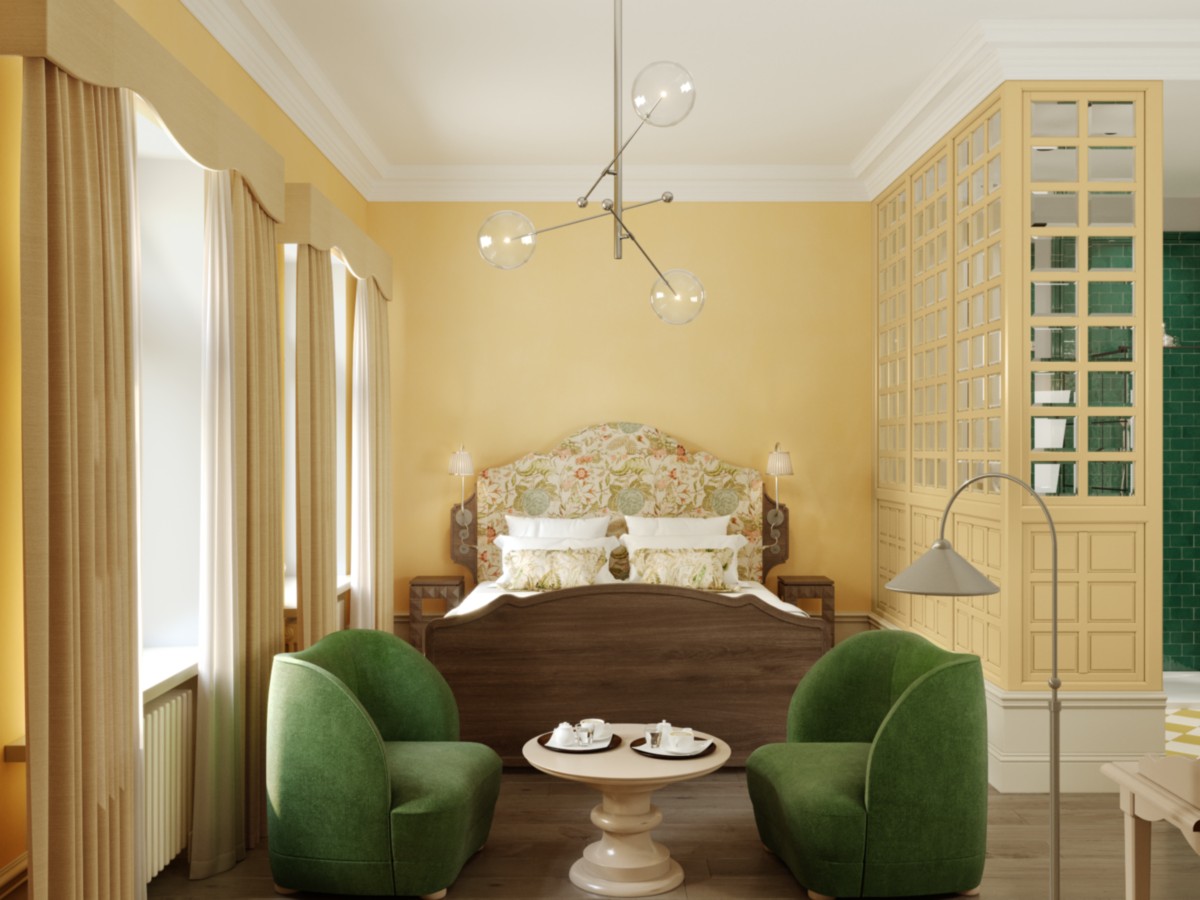 Villa Dagmar, is one of the 39 hotels that National Geographic qualified as the best boutique hotels in the world. It is situated in the wealthy Östermalm area of ​​Stockholm near Humlegården park and the Östermalmssaluhall food market.

The Villa Dagmar hotel has 70 rooms and suites with selected furniture from Italian and Scandinavian designers. Rooms have views towards the different interior gardens or the streets of Stockholm. Villa Dagmar includes in its prices free access to the gym and the Dagmar Spirit & Retreat. In addition, in the hotel there are performances by DJs or live groups from Wednesday to Saturday until 11:00 p.m. 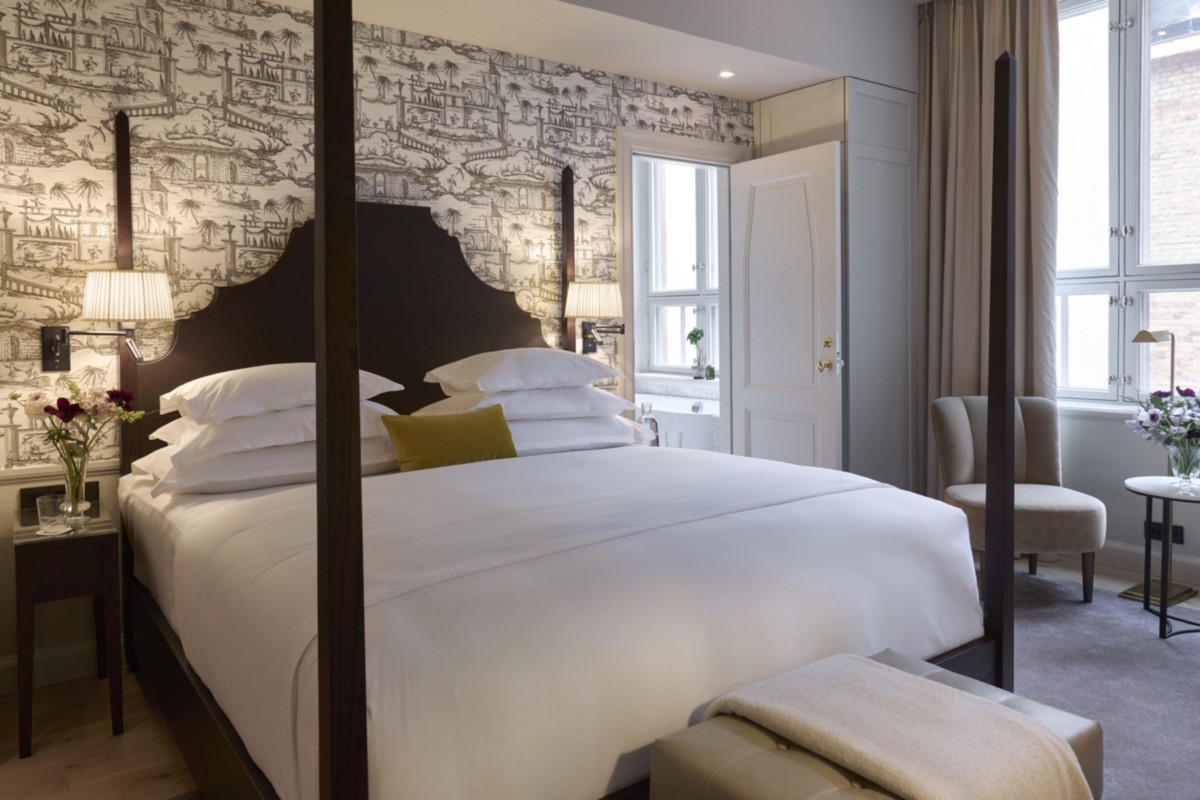 Deluxe room at the Villa Dagmar hotel in Stockholm, Sweden

In Gothenburg, the country’s second largest city, the hotel industry is also on the move. In the article where I explain what to do in Gothenburg I also talk about the hotels in Gothenburg that I like the most.

The hotel that is causing a lot of expectation in Gothenburg is the Jacy’z Hotel & Resort that will be part of the new 100 m high skyscraper that the city will have located behind the Ullevi stadium. It will occupy all 28 floors of the building and will feature a Miami-style pool and club on the top floor. In addition, the area called JQ will be the most exclusive with rooms inspired by Las Vegas from the 70s and pieces of art. 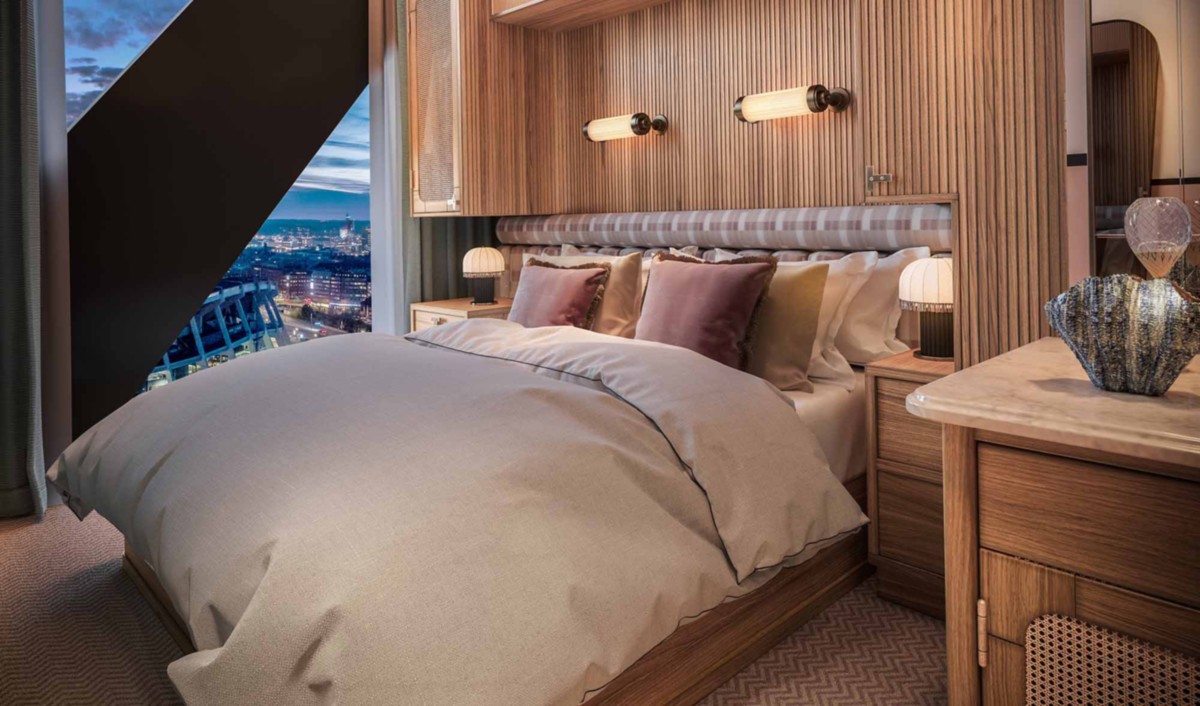 Render of the room of the Jacy’z Hotel Resort in Gothenburg, Sweden

In northern Sweden there are new hotels in Kiruna, Skellefteå and Övertorneå.

In Skellefteå, The Wood Hotel by Elite has just opened a 4-star, 20-storey hotel built entirely of wood and rated by The Guardian as the best example of architecture in 2021. The interior is inspired by typical Swedish log cabins and the entire hotel breathes sustainability through its walls. It has 205 rooms, conference space for up to 1,200 people, three restaurants, and a spectacular terrace with panoramic views and the Vana spa. The Wood Hotel in Skelleftea, Sweden

Also in the Västerbotten area, the Jörn Experience Hotel has opened, offering 60 rooms and 25 experiences. The focus of this hotel is on experiencing Swedish nature during the day and enjoying a restful sleep in cozy rooms at night. They offer dog sledding experiences, moose watching safari, etc. 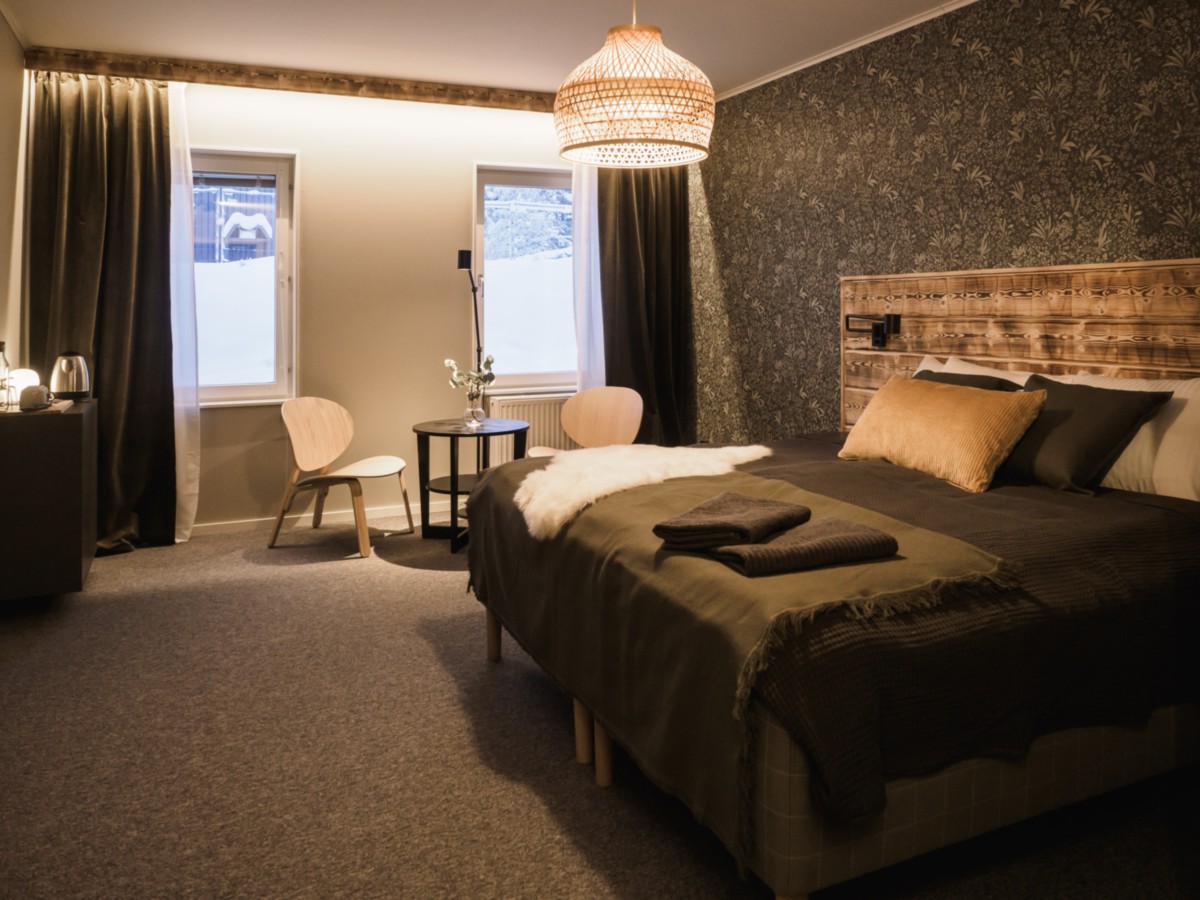 In Kiruna, a city that is in the process of moving its entire historic center, the Scandic Kiruna is scheduled to open in April 2022. This hotel will replace the current Scandic Ferrum.

When it does, the Scandic Kiruna hotel will feature Sweden’s northernmost skybar with views of the mountains of Swedish Lapland. The U-shaped exterior of the hotel is inspired by two of the most magical natural attractions in this region: Kebnekaise Mountain and Lapporten, the mountains and valley that form the natural gateway to Lapland. The interior will reflect the seasons whose number in this part of the world amounts to 8 according to the Samis. 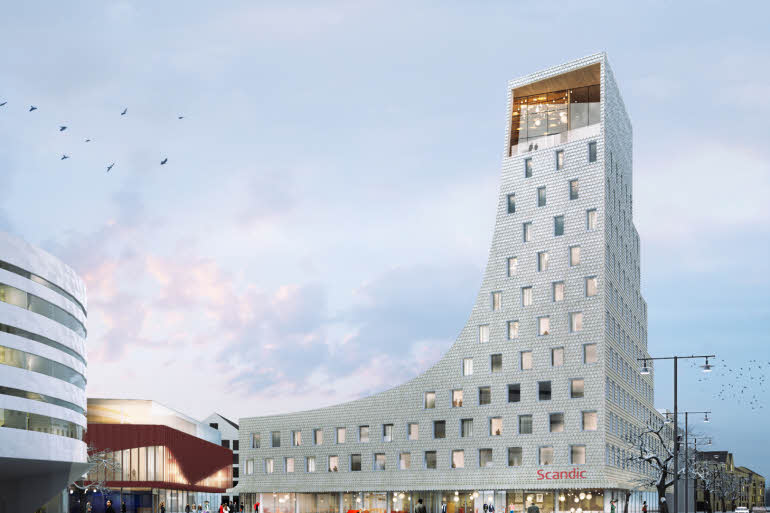 Also in Lapland on the Luppio mountain in Övertorneå, near the border with Finland and the HaparandaTornio region, the Lapland View Lodge opened. This is a hotel with 40 cabins with huge windows and panoramic views of the treetops.

In the area of ​​the Dalarna mountains next to Norway in Sälen, the magnificent Swedish ski destination that aspires to achieve international prominence, has recently opened the SkiStar Lodge Hundfjället. The resort offers direct access to the most modern gondola lift in Scandinavia and is a suitable place for families. 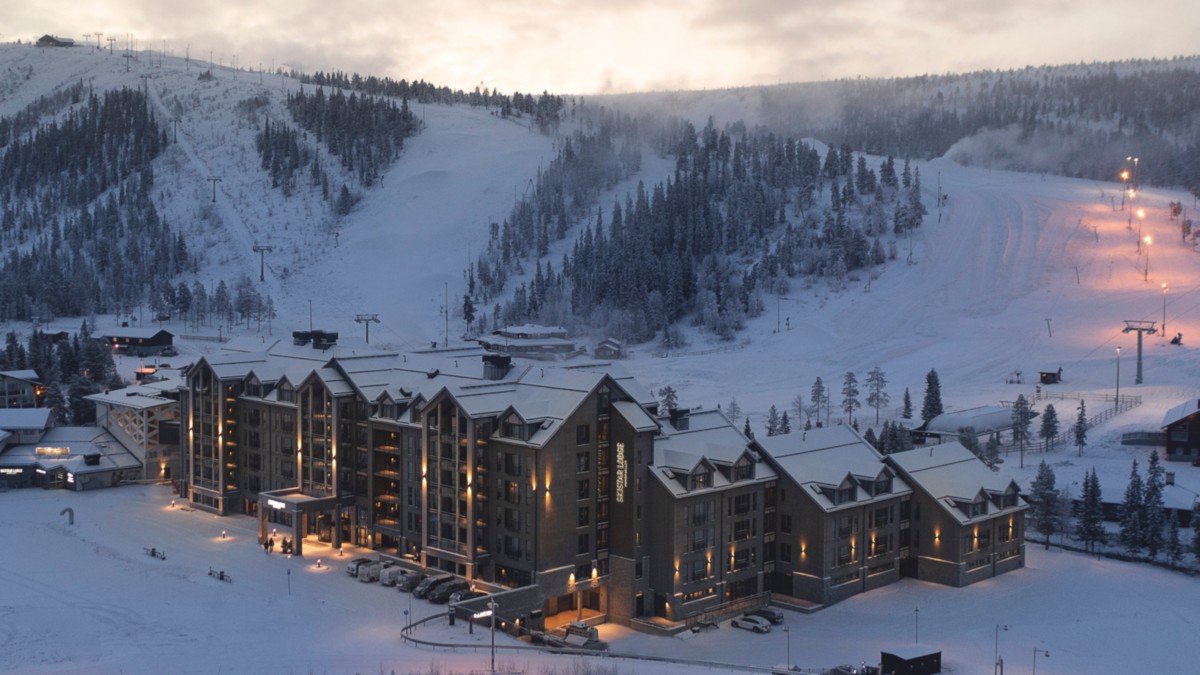 Finally, in the south of Sweden, in the city of Helsingborg in Skåne, the Clarion Hotel Sea U has opened. This hotel is the largest in the Swedish city and forms a significant part of one of the new districts of Helsingborg.

The Clarion Hotel Sea U has 250 rooms with exclusive Scandinavian design and impressive views towards Helsingör in Denmark. It also has several restaurants, one of which is a rooftop bar and outdoor pool. All this with a permanent weekend atmosphere. Room at Clarion Hotel Sea U in Helsingborg, Sweden

These are some of the newer hotels in Sweden that are worth visiting if you like to explore what new accommodation has to offer in terms of trends in design, experiences, gastronomy.

If you are looking for a hotel for your holidays in Sweden you can look at these other articles.